The swiss expat in data. 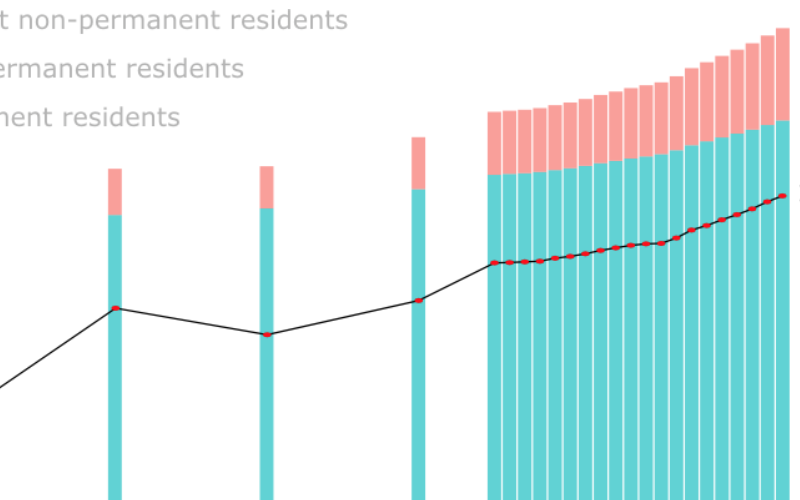 For the last month and a half, Tina and I have been living in Basel. While the old town of Basel is in Switzerland, the modern town spans three countries: Switzerland, Germany and France. This helps contribute to a very international feel to the city, which made me want to look into who actually lives in Basel.

I haven’t looked in detail as to what the exact definitions of the values used in this analysis - and I found some discrepancies that I have not explored in detail. An example being this link from the same site I pulled the data from, containing a report with slightly higher numbers of foreigners to citizens (although I suspect it is different as they are looking at nationality, not residence status).

What is a foreigner?

According to Statistik Schweiz, there were 8,238,000 permanent residents registered in Switzerland, and 1,998,000 non-permanent residents (19.5%). I’m interested in the number of expats, or more explicitly, the kind of people that have not yet integrated into the Swiss population. Residency type is probably a good indicator of this, as hopefully by the time you earn permanent residency, you would no longer identify as an expat.

There are lots of different ways to define what a foreigner is though. Using a more general definition of foreigner (rather than looking at permit type), 23.8% of people living in Switzerland, and 34.3% of people living in Basel, are foreigners.1 I found the following quote interesting (taken from the Statistik Schweiz website2), which I think is referring to place of birth to define foreigner status:

The age profile of Switzerland.

Below I have plotted an age distribution of Statistik Schweiz’s predictions of the age level breakdown of the population. I’m mainly including this as in the following plots, I’m plotting density curves, which show the distribution well at the expense of obscuring the quantity of observations. The take home message being there are lots more permanent residents than non across all age groups.

The age profile by canton.

The following plot shows the age distribution by residency type - across Basel Stadt (the city), Basel Landschift (the suburbs) and Switzerland as a whole. It’s pretty obvious from this plot that the non-permanent population tend to be younger, which makes sense, as many people move here to start their careers. While this is complete speculation, the larger bump of non-resident children in the suburbs compared to the city probably reflects the fact that families moving to Basel are less likely to move to the centre. Another, completely un-supported and probably false, hypothesis is that the camel hump on the left plot near the median is showing that people moving here at the start of their careers are less likely to be able to afford to live in the centre.

Below is a table of data, all pulled from the Statistik Schweiz site. While only 9% of the population have English as their primary language, I should add that in the month I’ve lived here I am yet to come across someone that can’t speak English. While the religion field is probably the strongest proxy of the more modern and liberal feel of Basel compared to the rest of Switzerland.

The change in proportion of foreigners in Switzerland.

The following plot shows the change overtime in the number of non-permanent residents. I was experimenting with dual axis plots here. In my research I’ve always gone with facet plots, to save any potential confusion over which y-axis refers to which datapoints. I think here it’s obvious the line plot is not mapped to axis labels, but I’d probably not use this plot in a work/academic setting, unless it was a talk and I was explaining the plot.

In terms of the actual data - it looks like their has been a large proportion of expats present since at least 1970.

The data presented so far has been limited to where people are registered to live. While some people commute in from nearby cities in France in Germany, the suburbs of Basel also stretch into both countries, yet these people were not accounted for in the numbers above. In Basel, about 19% of the workforce are cross-border commuters, compared to 4% in Switzerland as a whole (these are crude numbers3).