Testing the urban legend that Ryan Air fakes their on time data. 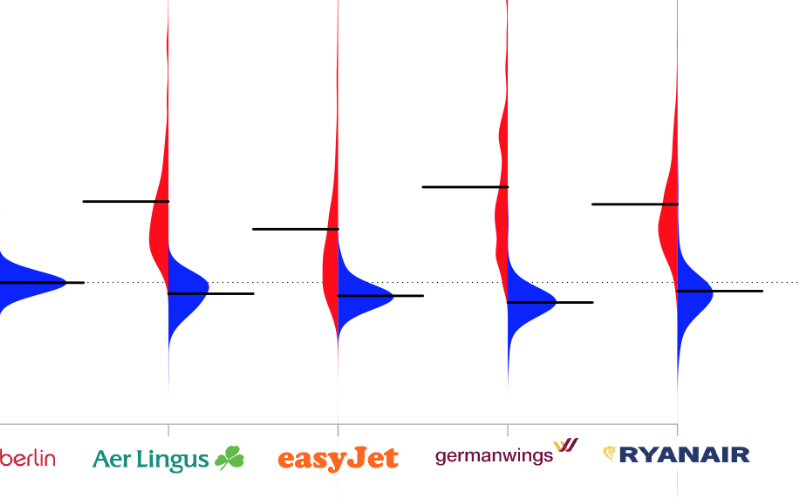 I’ve heard comments like the quote above many times before - yet I’ve never seen any real evidence. I’m tempted to believe it, as Ryan Air is no stranger to crude/attention grabbing methods. Alluding to charging to use the the toilet, standing seats and scamming people with scratchie cards are all topics they’ve covered before. As flight data is pretty easy to get your hands on, I figured it would be a fun side project to see if I could find some data to explore the myth myself.

To test out the “Ryan Air” theory I set up a python script that would call the flightaware.com API to pull down data on the last weeks 72 hours worth of flights, then I left the script running as a CRON job for several months.

Overall I pulled flight data on 22 routes where there was Ryan Air and one of five other airlines flying the exact same route. Unfortunately I didn’t find any routes flown by Ryan Air and a non-budget airline, so this comparison is limited to Ryan Air vs it’s contemporaries. Across the 6 airlines (Ryan Air plus 5 others), I had full data on scheduled and actual flight times for 3,421 flights. The python code was actually really simple - and an example that will pull data on one flight is below.

‘Actual time’ and ‘Scheduled time’ are two variables I am relying on, without having been able to 100% nail down what they mean (and it is rather important here). From scanning the API documentation, I believe that when I say ‘actual’ and ‘scheduled time’, both variables are referring to when the plane leaves or touches down on the runway (not the time the plane is scheduled to leave or arrive at the gate).

This suggests that with both airlines you are likely to spend less time in the air than scheduled - providing some very weak evidence they (as in Ryan Air and Easy Jet) pad the scheduled flight times.

The plots below show the difference between Ryan Air and Easy Jet. Both models had route as a random effect. Models were otherwise unadjusted. This model (slopes and intercepts vary across routes), rather than a standard fixed effects model (intercepts vary/robust errors/no adjustment for clustering being three other options within a fixed effects model), seemed to be in line with each route being a sample from all possible routes.

So do all the budget airlines pad their numbers?

In addition to pulling data on Ryan Air, I had data on four other airlines. The following plot shows the distribution of when planes took off and landed (relative to when they were scheduled to). In this plot it appears that all the airlines I looked at would systematically take off late and arrive just a little bit before they were scheduled.

I only pulled data on a small selection of Ryan Air flights, where they shared routes with other airlines. So I don’t think I can answer the question with any confidence. I also couldn’t find any documentation that clearly laid out what the scheduled and actual times represents - although matching up the more detailed website data to the API data it looks like my interpretation is hopefully accurate.

I recently set up my own server on an old laptop, so plan is to collect more data now that I can schedule CRON jobs more reliably.