Using a glmnet to predict the sentiment behind Trump tweets 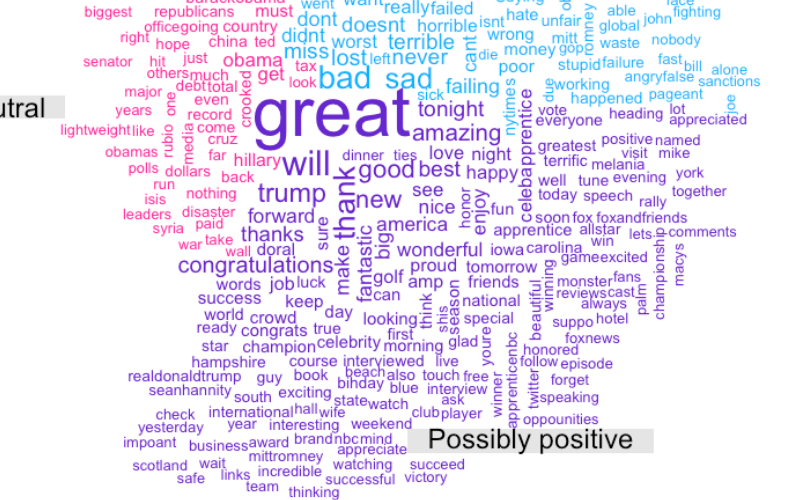 In a previous post I categorised wine reviews based off the balance of known positive or negative words. This is a relatively simple algorithm, and I was interested in trying out Lasso and Elastic-Net Regularized Generalized Linear Models (GlmNets) as a potentially more powerful method to classify text by sentiment.

I have access to two training sets where tweets have been coded into positive or not positive sentiment.

I will train two prediction models, one on each training dataset, to predict ‘positive sentiment’ using a GlmNet prediction model. I can then try out how this model works ‘out of sample’ to explore an archive of every tweet Trump has ever made.

I didn’t really do anything special fitting this model, and there are proper GlmNet examples by statisticians on Rbloggers. So I won’t post my full code here. For a an intro to the method, this video is also really good.

Model one is based on 5,113 tweets hand coded into whether they had a positive sentiment. I did a 90/10 training/test split and 10-fold cross-validation weighting the alpha to Lasso. It ran in 4.1 seconds.

Model 2 is based on 1.6 million pre-classified tweets. I fit the same model, but this time it took 72 hours..

An important caveat for this second training set is that rather than handcoded, the sentiment classification is the product of an algorithm. This means I am training my data on a potentially flawed set of what’s positive and what’s not (as I trust an algo less than hand coding). This training set was made from an earlier model built by some guys at Stanford. So for now let’s ignore the fact that the accuracy of the training data’s classification could be low.

All Trump’s tweets from 2009 to 2017 are available from github. I downloaded these tweets as the basis for most of the plots.

For the non-Trump tweets, I used the Twitter API to pull down tweets based on location. The twitteR function is super easy to use - this simple function below was all I needed to pull down the tweets.

Interestingly, despite applying the same algorithm to the datasets, the resulting predictions vary greatly. It really highlights that the sentiment accuracy is really specific to the data the model was trained on. Twitter is hugely diverse, and even a sample of 1.6 million tweets is likely to create a model with poor out-of-sample performance. The following plot shows the two scores in a scatter plot.

Accepting that the prediction has errors, the following plot shows the median sentiment of Trump’s plots over time. Here I’ve removed retweets and only plotted tweets made from Andriod. Surprisingly, there wasn’t much of a change in sentiment detected in the lead up to the election.

Focussing just on tweets mentioning ‘jobs’ I see a lot of variance, but maybe the makings of a meaningful trend. Note that I had to manually remove tweets about Steve Jobs (Trump is not a fan of the apple founder). The following plot shows what appears to be weak evidence of a trend to a much more positive outlook on jobs in the latter half of 2016 and early 2017.

Out of interest I also did a word cloud of Trump’s tweets, splitting the tweets into tertiles based on the likelihood the sentiment of the tweet was positive.

Views about Trump by city

Here I just searched twitter for tweets mentioning Trump, that weren’t retweets. Interestingly there wasn’t much differentiation in the likelihood a tweet was positive by city. This might be due to inaccuracy of my classification model, or simply a reflection of the fact that there might not be that great of a difference in the way twitter users post about Trump across the different locations.